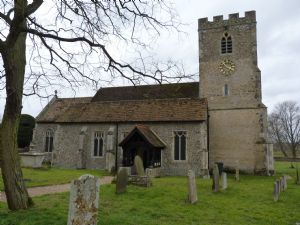 This beautiful little 13th century church stands at the bottom of the drive leading to Higham Hall, a manor house built in the 17th to 19th centuries.  It is possible that there was originally a priest's house on the site of the modern Hall, as you can still see a blocked-up priest's door on the south side of the church.  There is also a private entrance from the Hall to the south churchyard.  The main entrance to the church is now through a 19th century wooden porch set into the north wall.

The water meadows of the Stour and Brett reach up to the edges of the churchyard and occasionally flood them.  A view of the south face of the church was sketched by John Constable in the 18th century and a copy is kept in the church vestry.

The tower - housing a good ring of 6 bells with a 6 cwt tenor - is probably 13th century and, judging by the tracery in the chancel's east window, the nave and chancel were probably built soon after.

A narrow north aisle was added in the early 15th century, and there is a decorative four-bay arcade between nave and aisle, which shows on the nave side four heads, including those of two women wearing a net head-dress known as a crespine.

The 14th century font has a traceried stem.  There is another bowl on the floor nearby on which small blank shields are carved.  It was originally set against a wall and although now called a font may well rather have been a large water stoup forming part of the vanished south porch.

There is a bas-relief memorial to Robert and Marion Hoy on the north wall, carved in 1811 by Charles Regnart.  On the south wall there is an obelisk design over a chaplet of flowers as a memorial to Helen Dawson, who died young in 1863.

On one of the south windows there is a World War I memorial with regimental crests and a figure of St George paired with one of Richard the Lionheart.  Further along there is a window depicting in Pre-Raphaelite fashion the figures of Faith and Charity.  Just underneath it there is a piscina, showing that there had once been a nave altar nearby.

The choir stalls probably date from the 19th century restoration.  They have the symbols of the Evangelists on the elbows and lions at the front.

The sanctuary is tiled in rose marble, and the design includes a nicely lettered 10 Commandments, Lord's Prayer and Creed.  There is a plain tablet in the corner for Alice Dokenfielde who died in 1622, and below it is a 16th century piscina, a wooden credence shelf and a drain shaped like a Tudor rose.  The chancel floor was probably tiled in the 14th century.

Adapted from the entry in D.P. Mortlock, The Guide to Suffolk Churches, Lutterworth Press, 2009