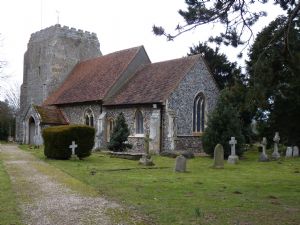 You come into the church from a small square off the main road through Holton St Mary, and there you will find, facing you, the original 18th century School House, now a private home.  The School probably had hanging outside it a painting, now in the church, which was recently identified as a possible early Gainsborough.  It shows a young man wearing a tricorne hat, leaning on a spade and holding a paper in one hand.  The legend reads, 'Opened August 29th 1748'.  Mortlock tells us that the origin of the School is acknowledged by an epitaph to Revd Stephen White on the north wall:  'On April 12, 1773 being Easter Monday as he was officiating in the church he was suddenly called away from his labours to receive their Reward, and expired in that School which his Piety had raised' (The Guide to Suffolk Churches, Lutterworth, 2009).

However, the church existed for centuries before that:  the chancel, which is the earliest part of this delightful little church to survive, dates back to the 13th century, and you can still see the original priest's door on the south side.

The squat tower was probably much taller originally, and the porch was added in the Victorian era, though the tower arch is 14th century.  The benches in the porch incorporate medieval poppyheads.

There is a large glacial boulder built into the north-west buttress.  Mortlock tells us that 'this may be an example of a practice in the early church whereby a stone with a particular pagan significance was appropriated to the service of the new religion'.  This indicates that there may well have been a church on this site for centuries before the present building.

The nave is 14th century and originally had a north door but that was blocked at some time in the past and the top half glazed.

The font is 15th century and has a Tudor rose, defaced shields and a fleur-de-lys in the bowl panels.  There are also sockets for shafts around the base, which clearly belonged to a 13th century predecessor.

In the chancel there is a 13th century piscina and an aumbry which was originally fitted with a door.

(Adapted from the entry in D.P. Mortlock, The Guide to Suffolk Churches, Lutterworth Press, 2009)

THE VILLAGE OF HOLTON

The name is probably derived from the Anglo-Saxon 'Holan Tun' or Hola's Farm.  It might also mean 'farm in the hollow'.

It is likely that Holton experienced some Roman influence, being very close to the main Roman road north from Colchester, approximately along the route of the present-day A12.  There is another surmised Roman road from Stratford St Mary through Hadleigh to the junction of established Roman roads at Bildeston.  There have been some very minor finds of Roman coins and pottery in the parish, and it is claimed that there are some Roman tiles in the church fabric.

Holton is mentioned in the Domesday Book Survey of 1086 as having a population of 19, including 4 slaves.  It had a church, 24 acres of meadow, 2 horses, 2 cattle, 10 pigs and 60 sheep.  The number of pigs was related to the extent of the woodland in the parish.

The only manor mentioned by name and clearly the main one was Holton Manor, which was described as being 6 quarantines (furlongs) long and 4 quarantines wide; it was of 2 caracutes in area (a car acute being the land that a team of 8 oxen could plough, or 120 acres).  There appear to be other holdings of land in Holton of 30 acres and 33 acres of meadow.

Immediately prior to the Survey some of the adjoining manors in Raydon were held by Ausgar, the same freeman as held Holton, so border changes could account for area discrepancies.  After 1066 King William I appointed Geoffrey de Mandeville to many Suffolk manors including Holton.

In following years names of owners included in 1258 Robert Raydon, and in 1309 Alicia, wife of John de Holbrook.  During Henry VI's reign in the mid 15th century the Fastolfes (Shakespeare's Falstaff) held the manor till the Mannocks became owners.

The first reference to a second Holton manor named Boytons, quoted as a sub-manor, was early in the 13th century.  It was held first by Robert de Stratford and then by the de Boyton family.  In the late 13th century the manor of Boytons is quoted as providing the right of free warren - hunting rights both on the owner's an his tenants' lands of all small animals - to William de Boyton.