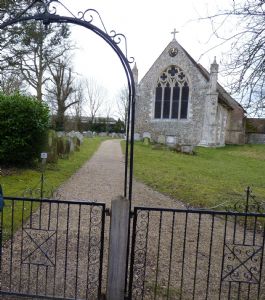 Raydon means rye-covered hill, and you will see as you come into the churchyard that the church is indeed set on a hill.  This beautiful church in the middle of the village was built some time in the early 14th century, though there must have been an earlier church, as there are records of a Rectory valued at £8 in 1254 and £12 in 1291.  It now has a rather strange truncated appearance from the outside, as it once had a tower until it collapsed in the mid 18th century, bringing down 4 bells with it.  Three of these were badly cracked, but the tenor bell survived and was recast in 1867 by John Warner of Spitalfields in London.  Nowadays this single bell hangs in a small belfry.

As you approach the east end of the church facing you as you come along the footpath, you will see a large 19th century window flanked by two fine buttresses terminating in richly traceried octagonal shafts, with pinnacled and crocketted finials.  These were restored in 1983 by the sculptor Bert Gale.  On the East wall, where the wall, roof and pinnacle meet, there is a large carved dragon with a curly tail.

As you continue on the footpath, along the south wall, you will see the priest's door to the chancel standing between two small buttresses and two small windows.  Further on there is a large buttress featuring a scratch dial, then two large nave windows with headstops, one in the form of a lion's head, and the other a devil.

Passing the porch, there is another large nave window with two more headstops, usually thought of as two dames.

Going round the belfry to the north wall, past a large nave window, you will see the late 19th century vestry.  Past two more nave windows with some more interesting headstops, you come to a very unusual pair of triangular buttresses, flanked by two low windows.  Between the buttresses there is a low projecting wall, which allows for the recess or the Easter Sepulchre in the chancel.

It is to be noted that the 2 foot 6 inch thick walls of the church are constructed of flint and rubble, with plaster rendering.  Caen stone is used for windows, buttresses and doorways.

Passing through an open wooden porch, one enters through a plain 14th century doorway with a cracked 13th century grave serving as a threshold.  To the right as you enter is the remnant of a holy water stoup.  Above the door is a niche, probably for a statue of our patron saint, St Mary, but which is now regularly used by birds for nesting purposes.

To the left as you enter is a doorway to the belfry, above which remain some of the fixings that held up the gallery where the choir and band sat during the 18th and 19th centuries.  This was taken down during extensive renovation in the 1880s.  The music would have been robust, rhythmic and rustic, delighting in unorthodox harmonies and simple counterpoint.  Thomas Hardy gives an excellent description of a typical rural band in Under the Greenwood Tree.  The organ that replaced the band in 1883 was built by Henry Jones (1822-1900) of Chelsea.  He was a well-known organ-builder, having built his largest organ at the Royal Aquarium in London in 1876.  The organ was built and placed in the chancel in 1889 but was moved to the west end of the nave in 1998 and fully restored by P.R. Jackaman.

In front of the belfry door you will see a small font with an octagonal bowl, thought to date from the 19th century.  It was badly damaged in 1999 and found to be constructed of plaster, rubble, metal rods and wood on a stone base.

Facing you, in the north wall, is the new vestry, opened in 2008 by the then Archdeacon, the Venerable David Brierley.  Its doors were presented to the church by Veterans of the 353rd Fighter Group of the American 8th Air Force, stationed in Raydon during the Second World War.  These brave men are still remembered by Raydon inhabitants, and members of the congregation still keep in touch with their descendants.  On the right of the vestry there is a Roll of Honour dedicated to those airmen who lost their lives while serving with the 353rd.  It is contained in a handsome wooden case made and donated by P.A. Keeble and Sons.  It is surmounted by a processional cross, also given by the Veterans on a subsequent visit to Raydon.

Further along the north wall there are also Rolls of Honour to those from Raydon who served in the two World Wars, including the names of 19 dead or missing.

Continuing along the north wall, you can still see the small entrance to some steep stairs leading to the rood loft, which would have been above the rood screen separating the nave from the chancel.  Neither have survived, but the position of the rood beam - which carried the 'rood' or cross and was normally flanked by the figures of Mary and St John - is indicated by two remaining wooden brackets either side of the chancel arch.

Proceeding into the chancel, you will see that it is very light and airy, because during the Civil War of the 17th century, William Dowsing was appointed as Parliamentary Visitor, with orders to deface or remove all 'superstitious' pictures, inscriptions and ornaments in Suffolk churches.  According to Dowsing's journal, he first visited Raydon on 20 January 1643 and 'brake down a crucifix and twelve superstitious pictures and Popish inscriptions'.  This probably included stained glass, as there are only a few pieces of medieval stained glass left, in the side windows of the chancel.

The chancel is also remarkably large and open for a church of this size, with exceptional accoustics, making it a valuable concert venue.

In the north wall of the chancel there is a large arched recess, which may well have been the founder's tomb, but it has also been used as an Easter Sepulchre.

A little further on there is a black marble tablet set within an alabaster frame enriched with skulls wearing laurel wreaths.  A flaming urn sits in the broken pediment, commemorating John Mayer, Rector of Raydon from 1631-1664.  He was 'a faithful and laborious servant of God' who was 22 years at Little Wratting before serving his 33 years in Raydon!  He died at a good age in 1664 and clearly was no simple country parson, for his epitaph reads, 'He wrote also for ye publick good these most useful books' including Bible expositions in many volumes, an Antidote against Popery, and Ye History of the world from ye Creation to 1648!

On the south wall there is an early 14th century double piscina, constructed like a complete window head, but unfortunately the chancel floor was raised in the 19th century, to its detriment.  The design exactly matches that of the side windows, showing that it was probably made along with them.

Further down on the south wall, going back into the nave, there is a small piscina with a finely moulded trefoil arch, which may mark the site of a previous altar in a small chapel.

Nearby on the floor there is a small black tomb slab which has remaining brasses, one of which bears an epitaph to Thomas Reydon.  The other is an 8-inch figure of his wife, Elizabeth Reydon, but it lacks the top half with her butterfly head-dress.  Both date from 1479.

Also in the south-east corner stands the Victorian pulpit, which was moved in the 20th century from under the chancel arch.  It originally had a stone base.

If you are interested in the fascinating kneelers in both Raydon and Stratford St Mary, sewn by local people, please check out a new national website called:  www.parishkneelers.co.uk, where you can see some of our kneelers displayed.

Adapted from the entry in D.P. Mortlock, The Guide to Suffolk Churches, Lutterworth Press, 2009, pp. 387 & 388, and from 'A Walk round St Mary's Church Raydon', a booklet by Denzil Reeves, late Churchwarden of Raydon